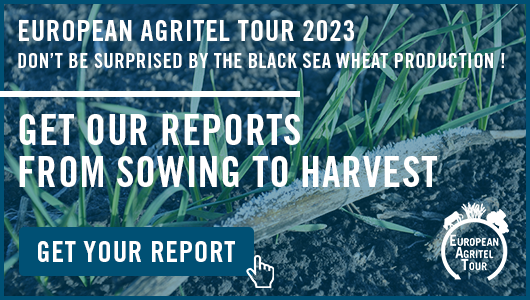 European financial markets rose yesterday, buoyed by stronger-than-expected US growth figures for the fourth quarter of 2022 and, to a lesser extent, by a stabilisation of the euro below 1.09 against the dollar. This relative optimism does not erase the risk linked to the conflict in Ukraine where new Russian strikes hit Kiyv and the Odessa region yesterday.

The cereals market rebounded yesterday. After a sharp decline at the beginning of the week, prices on Euronext rallied to come back on last week's levels. Western European exporters remain cautious, in the face of price evolution in Russia, but also in Romania and Bulgaria. Yesterday, the European Commission did not revise its export potential for the current campaign. It is still counting on a volume of 34 Mt for soft wheat.

Corn prices are also adjusting upwards, benefiting from the firmness of wheat on one side and from interrogations on the production corn potential in Ukraine next season. The Ukraine Grain Association forecasts a severe decline in production  due to the situation in the country, predicting a best-case scenario of 18 Mt for the coming season.

The strongest rebound was recorded yesterday in rapeseed after the fall recorded in recent days. A recovery was also seen in Canadian canola, palm oil and soybean yesterday. As a reminder, Euronext's February 2023 contract expires at the end of this month.

Grain prices in Chicago rose yesterday on the back of better weekly export sales figures. In wheat, for the 2022/2023 season, sales volumes reported by the USDA exceeded 500,000 t, up from the previous week. The drop in prices observed at the beginning of the week has encouraged a return of interest for U.S. origins. In Chicago, the March 2023 wheat contract has risen from its Monday's low, offsetting the decline seen for the past week.

During the Paris Grain Conference yesterday, the USDA's official justified the doubts about the Russian production estimates. He said that announced levels well above 100 Mt were not feasible according their models and data.. As a reminder, the USDA has renewed its estimate of 91 Mt of wheat production in Russia in its last report.

The corn market has also progressed, supported by good export figures. Chicago prices have returned to levels close to last week's highs and are testing once again the resistance zone around $6.90/b on the March 2023 contract.

Soybean prices also rose yesterday. Here also, weekly sales were up from recent weeks. At the same time, an exceptional sale of 106,000 t of soybean to China was announced yesterday for the 2023/2024 season.

Request access to the full daily report on the Black Sea Basin contained in the Argus AgriMarkets service by clicking here.

Closing of the Paris Grain Conference this morning