Markets continue to be uncertain about the consequences of the coronavirus epidemic. The appearance of new cases in France raises fears and could have repercussions on economic activity. The fall in world demand is nevertheless opposed to the fact that Argentina has decided to temporarily suspend its exports, a probable prelude to a further increase in its taxes. It must be said that Argentina’s financial situation is most worrying, close to default.

On the international scene, South Korea was again buying corn, probably of South American origin, and 85,000 t of milling wheat, of US origin.

Despite economic uncertainties, the funds continue to hold long wheat positions on Euronext, estimated at 97,515 lots on February 21, compared to 83,653 lots the previous week. This illustrates the ambiguity of the current markets, with, on the one hand, a sustained export activity for the French origin, and on the other, economic growth revised down, in particular by the Bank of France.

The rapeseed found some support yesterday in the palm and canola, a consequence of the lower competitiveness from Argentina following the possible suspension of its exports.

The euro was up against the dollar this morning at 1.0910 due to a drop in Fed rates across the Atlantic anticipated by the traders.

Slight rebound in soybean prices was registered yesterday as a result of Argentina’s decision to temporarily suspend exports.

Wheat and corn evolved little. Wheat finds support in the long position held by the funds, while corn is penalized by prospects of an increase in areas to come for the next season. However, the corn exports were above expectations last week, which will have to be confirmed this evening.

In Brazil, the soybean harvest will soon come to weigh on the markets, with production expected around 125 Mt. 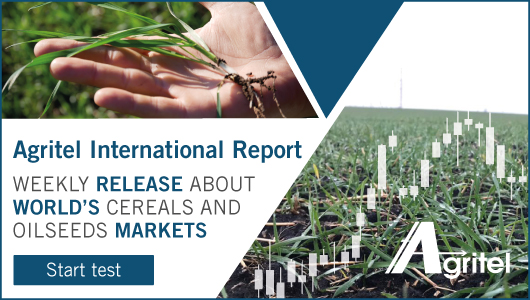