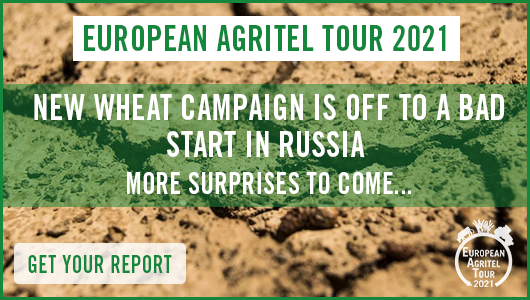 Cereals markets, including wheat, have been boosted by the announcement of another wheat tender from Algeria for shipments in December. Currently, French and European origins are especially competitive on the international stage, consequence of the jump of prices in the Black Sea area.

The weather remains very changeable and a cause for concern for autumn sowings in Russia and the USA. However, some insufficient and heterogenous rain has arrived in a part of Russia. In the country, the area sown could increase by one million ha compared to last year. In France, sowing should have progressed significantly over the last few days before the return of a rainy weather from today.

Corn harvesting is progressing in Europe with disappointing yields overall. For a change, the European corn is currently competitive due to soaring prices in Ukraine following a sharp drop in production compared to expectations.

Rapeseed was slightly down yesterday in the wake of palm oil. Europe should import significant volumes of rapeseed this year after the poor harvest of this summer. Canola is dealing at its highest level for last two and a half years yesterday. This morning the palm rebounds in Kuala Lumpur.

In Chicago, prices increased slightly yesterday. Current dry conditions and a buoyant export activity are still supporting most of the commodities markets. Yesterday, US corn sales during last week have been released at 911 012 t, on the top range of traders’ expectations.

The soybean harvest is continuing and 75% of the crop is reported as completed vs. 58% on last five-year average to date. Same trend for the corn with 60% completed vs. 43% in average. Winter wheat sowings are 77% complete compared to an average of 72% to date.

Wheat prices have reached their highest levels since December 2014 in Chicago.

In Russia, the end of the wheat harvest is fast approaching, with only 2% of the area left to be collected. As of yesterday, in bunker weight, producers had collected 87.2 Mt of wheat with an average yield still posted above 3 t/ha. On the other hand, 22 Mt of barley have been collected and only 4% of the area is left to be harvested.

Also, nearly 60% of the corn acreage, i.e. 8.2 Mt, is harvested. On oilseeds, the sunflower and soybean harvests are now achieved up to 84 and 65% respectively.

At the same time, producers are continuing to sow winter crops at a steady pace. 17.5 Mha are already planted. It should be noted that significant rains fell in the central district of the country over the weekend.

The covid is spreading rapidly in all countries.