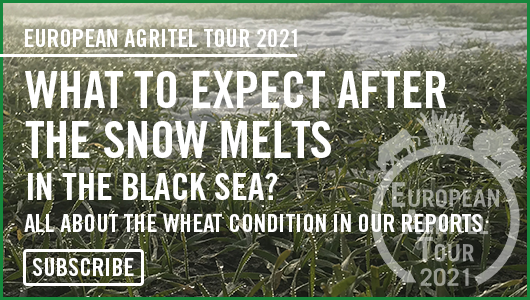 Wheat prices are consolidating at current price levels, while international demand for feed barley remains strong. In terms of balance sheets, international corn prices also remain strong. However, rapeseed was the best performer yesterday, rising by between 4 and 5 €/t depending on various Euronext contracts.

Yesterday's activity on the international scene was rather reduced. Only call for tenders for about 88,000 t of milling wheat by Taiwan should be noted. The sourcing for this destination usually comes from the USA.

The Algerian call for tenders attracts the traders’ attention. The price difference between buyer and seller is very large, close to 10 $/t, suggesting a purchase for a relatively small volume. However, this remains to be confirmed. The European origins are still the most competitive, notably the Baltic and Polish.

From a climatic point of view, there has been a slight improvement both on the South American continent and in Russia, with some rainfall, but still insufficient to wash away fears.

Palm oil supports the rise in the vegetable oil market with a combination of falling production and sustained demand, mainly from India and China. It should be noted that China shows positive GDP growth for 2020, despite the context of the pandemic.

Corn and soybean prices continued to rise yesterday in Chicago, despite the effect of coming harvest. Wheat, on the other hand, was consolidating, because in particular of the return of some rains in Russia and the USA.

Soybean supplies are reduced, with Brazil having committed almost all of its 2020 harvest. An abundant harvest will be needed next March to supply the world market, with fears of the late arrival of Brazilian soybeans, given the water deficit in the earliest producing areas, such as Mato Grosso.

Grain prices in the Black Sea basin have been rallying again since the beginning of the week. The prices of the main crops on CPT Odessa were at the following levels yesterday evening:

This euphoria is also observed on the oilseed market with sunflower seed EXW prices trading at around 560 $/t in the central regions of the country (including VAT), up by around 20 $ since the beginning of the week. As for soybeans, the CPT Odessa prices for GMO is trading at 460 $/t, up by more than 20 $/t since last Friday.

These increases are explained as much by the movement observed over the last few days on the world's exchanges as by the traders’ difficulties to source the commodity to honour their contracts.